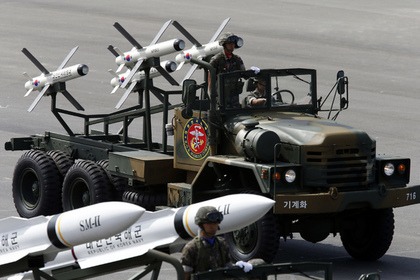 The Republic of Korea is studying the possibility of launching ballistic missiles as a retaliatory measure on the DPRK carried out the test. On Monday, February 13, reports “Yonhap”, citing sources in South Korean defense Ministry.

According to them, Seoul is thinking about the launch of short-range missiles Hyunmoo-2A (capable of hitting targets at a distance of 300 kilometers) or Hyunmoo-2B extended range (500 kilometers). In addition, does not exclude the testing of new ballistic missiles with a range of up to 800 kilometers, it could launch pre-emptive strikes on any nuclear and missile facilities of North Korea. The development of such weapons reached its final stage, the army of the Republic of Korea it can do this year.

On 12 February, the DPRK announced the successful launch of a ballistic medium-range missiles in the sea of Japan. In testing was attended by North Korean leader Kim Jong-UN. In connection with the launch of the United States, Japan and South Korea demanded to urgently convene the UN Security Council, it can be held already on February 13.