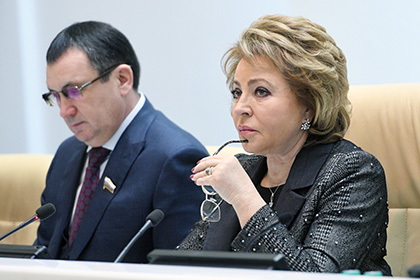 Russian diplomats in the present situation it is necessary not only to prevent international conflicts, but also to form a true image of the country abroad. This opinion was expressed by the speaker of the Federation Council Valentina Matviyenko in his blog on the website of the upper house of Parliament.

“To solve these problems is necessary in difficult conditions, something even more complex than during the cold war. Believe there are all grounds to state that Russian diplomats successfully perform this work,” — wrote the MP in a post dedicated to the Day of diplomatic worker.

She stressed that some States follow the concept of the hegemony of the West. Such sentiments, according to Matvienko, have been observed in some government circles of the USA and European countries.

However, now more and more signs indicate that attempts to isolate Russia “completely failed”, said the speaker of the Federation Council. “The international community, the peoples of the world are tired of the confrontation, uncertainty of the future,” she concluded.

Earlier on Friday, Russian President Vladimir Putin has congratulated employees of the foreign Ministry on their professional holiday. The head of state urged diplomats to continue active work on all directions, stressing that “our country faces challenges not getting easier.”

October 27, Matvienko said that women can cope better with the humanization of international relations, than the male politicians. In her opinion, the world is “tired of men’s brutal policy.”