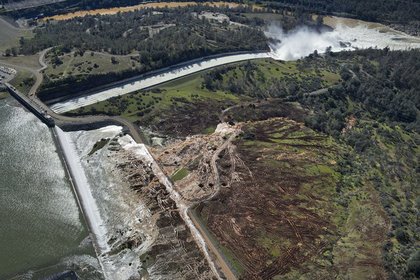 In the United States declared urgent evacuation of the population living below the Oroville dam (in Northern California. On Sunday, February 23, according to Reuters.

Authorities fear that the damaged as a result of erosion of reserve spillway could collapse in the next hour, which will lead to a flood of uncontrolled flow of water from lake Oroville.

In Orville live more than 16,2 thousand people, they were ordered to go in any direction except North, there is a dam.

On 11 February after heavy rains the water in the dam started to overflow through the emergency first, and then the main spillway, there is a marked destruction of the past. The lake level substantially increased, after a series of years of drought this winter in the region dropped heavy rainfall.

Oroville dam was built between 1962 and 1968. Hydraulic structure height of 230 meters — the largest in the United States.