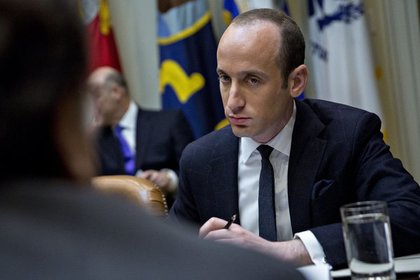 The White house is considering five options for further action in connection with the suspension by the court of the immigration decree, issued by Donald trump. On Sunday, February 12, said on the NBC television network senior adviser to the President on political Affairs Stephen Miller.

“We consider all of our options. Including, you can continue to appeal to the ninth (circuit court of appeals), to require the Supreme court issuing an emergency order to suspend (the court decision of the ninth circuit), it is possible to hold a hearing on the merits at the district court or in the extended format, the ninth circuit court. You can also take further action through Executive decrees,” explained Miller, noting that every effort will be made to protect the United States from terrorism.

He also added that the Executive branch counts on a par with the judicial branch, not the superiority of the latter.

February 10 the court of appeals for the ninth circuit in San Francisco (California) upheld the decision of a lower court on the temporary waiver was signed on January 27 of the decree trump “On the protection of the country from the entry of foreign terrorists.” The document banned for 90 days entry into the United States to citizens from seven countries with predominantly Muslim populations (Iran, Iraq, Yemen, Libya, Syria, Somalia, and Sudan). He also was suspended for 120 days of the entry of refugees from any of the States, and the admission of refugees from Syria were banned for an indefinite period.

The decree trump has caused mass protests. On 3 February, a Federal judge in Seattle James Robert lifted restrictions on travel to the US citizens caught under the instrument of seven countries.