ATHENS, 12 Feb — RIA Novosti, Gennady Melnik. The U.S. returned to Greece a fragment of an ancient marble sarcophagus worth half a million dollars stolen in the area of Thessaloniki in 1988 and was found in new York, informs television channel ANT1. 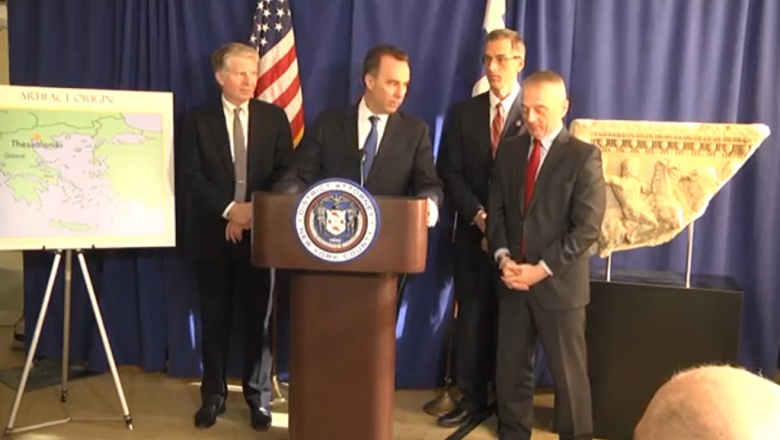 On a marble fragment depicts a standing figure of a man, on horseback, on the top part there are images of animals.

The sarcophagus was returned after only 28 days after he was discovered, said the Consul General of Greece in new York Konstantinos Kutras at the ceremony for the return of the artifact. “Cooperation of the Prosecutor with the Greek authorities, it was great, it was passed with incredible speed,” said the Consul General. For security reasons, Koutras did not say when the sarcophagus will be transported to Greece.

There is evidence that some stolen Greek artifacts can be found everywhere in the world. I hope that in the near future we will be able to celebrate the return of ancient finds in our country.Konstantinos Katrushenko of Greece in new York

The cost of ancient discoveries is estimated at 500 thousand dollars, just the initial price after the theft amounted to 95 thousand dollars, the said Colonel United States army reserve Matthew Bogdanos who previously headed a special unit for the investigation of stolen works of art.

Bogdanos, a Greek by birth, was engaged in the investigation of the looting of the Baghdad Museum.

According to Bogdanos, the exact route of the stolen goods is impossible to determine, but I assume that the sarcophagus had been in Europe and then resold in the U.S. in new York. “In this case was one arrest, as I recall, in the early 90-ies, in Italy,” he said. Bogdanos expressed the hope that other antiquities, stolen, or abroad, including the marbles of the Parthenon back to Greece.

The Prosecutor of new York Cyrus Vance, Jr. said that it was decided not to pursue the gallery, who purchased the artifact, as the owner himself has expressed the wish that the sarcophagus returned to Greece, regardless of paid amount.

“But I would like to advise the heads of the galleries who wish to buy ancient artifacts, study their origin on the subject, not whether they are stolen,” said the Prosecutor.