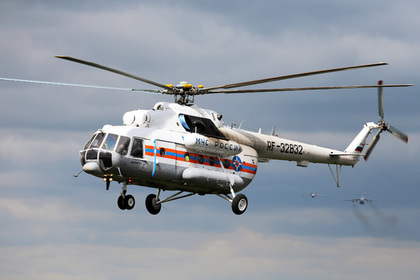 The Mi-8 helicopter of Ministry of emergency situations Riprodotta: Authorities reported the discovery of the alleged site of the helicopter crash in the Altai

To the crash site of a Robinson R66 helicopter in the Altai sent dozens of rescuers to Kumasi, they get there the morning of 13 February. On Sunday, February 12, RIA Novosti said a source in the regional Central Board MOE.

“The rescue team of 60 people is already headed for a possible crash site of the Robinson R66 helicopter in the Altai. In the area of falling of the helicopter sent airmobile group numbering 60 people. Rescuers will begin to search Monday morning,” — said the source.

Also, prospecting will be involved additional forces and equipment.

“Ready for flight are the two helicopters Mi-8 in Krasnoyarsk ASTs of EMERCOM of Russia with divers on Board the Mi-8 helicopter GCSPS the Federal air transport Agency”, — told the news Agency a source in the emergency services. In a press-service of EMERCOM in the region told TASS that it is planned to attract also the Mi-8 helicopter and three people from the company, “Altavia”, which owned the crashed helicopter.

In addition, it will seek to raise the hovercraft owned by the Berd search and rescue team and underwater vehicle Falcon. Now in the disaster area saved by bad weather conditions — strong wind and storm.

Head of administration of the Turochaksky district, Vladyslav Riabchenko has told RIA Novosti that the Republican rescuers found a prospective place of falling of the helicopter. According to him, the Cape is Kocsi. However, in the regional head office of the Ministry of emergency situations this information is not confirmed. “Still not clear where the helicopter fell: into the forest or into the waters of the lake. According to an eyewitness, the fall was still in the water,” — said the source.

As reports TASS, citing a source in law enforcement bodies, emergency services established the exact route of the crashed aircraft. “The helicopter was performing a sightseeing flight on the route: the area of Karasuk lake Teletskoye. After a flight to lake Teletskoye he had to return to the site of Karasuk”, – said the interlocutor of the news Agency.

He added that when Robinson was near the lake, communication with him was lost, and soon witnesses reported seeing him fall into the pond.

12 February at 20: 20 local time (16.20 GMT), eyewitnesses told of the crash of a Robinson R66 helicopter in Turochaksky district of the Altai Republic in the area of Cape Cocchi on lake Teletskoye. On Board could be five people, including former Vice-Governor of the region Anatoly Bannykh, however, official confirmation of this information.

It was also reported that the aircraft was transporting sick with pneumonia, an employee of the reserve, however, the flight was not sanctioned, as to fly over the reserve in the dark is prohibited. According to preliminary data, the helicopter could fall from-for piloting errors or bad weather conditions. These data have also not received official confirmation.

Currently, investigators Western-the Siberian Investigatory management on transport of Investigatory Committee of the Russian Federation are checking on the incident.