Celebrated today is the Day of the diplomatic worker coincides with another date — the anniversary of the death of poet Alexander Pushkin, who also had his time to work in Ministry of foreign Affairs.

“Газета.Ru” remember that part of the biography of the Russian classic that usually receives very little attention.

In the Tsarskoye Selo Lyceum, where he studied Pushkin, his fellow students and the other was a future Russian foreign Minister Prince Alexander Gorchakov. The diplomat continued to communicate with Pushkin, even during the opals on him, as the poet himself wrote in his poem “October 19” in 1825.

…You, Gorchakov, lucky from the first day,
Thank you Fortuna glitter cold
Not changed thy soul free:
All the same you for the honor and friends…

After graduating from the Lyceum, Pushkin first came to work in the foreign Ministry. Rather, he was recruited to the diplomatic service of Russia in the summer of 1817 with the rank of a collegiate Secretary.

In the archives is still preserved a document which Pushkin, and other young employees of the Ministry of foreign Affairs, had to sign, came to the service. It is the decree of Catherine II on 4 August 1791 “On the prohibition of the officials of the foreign Ministry to have intercourse with representatives of other powers to be in their homes, as well as disclosing official secrets”.

Pushkin was mainly engaged in translation work for the Ministry. In the expenditure books of the diplomatic corps found 8 notes, where Pushkin signs for vacation and the salary — it is at a collegiate Secretary of Pushkin in the third year amounted to 231 rubles.

The Ministry of foreign Affairs at that time was led by count Ivan Kapodistrias, who later became the first head of independent Greece. The chief was good to his slave, than later wrote to the uncle of the poet Vasily Lvovich Pushkin: “I Rejoice heartily that Kapodistrias to it well located”.

Kapodistrias, who had good relations with Tsar Alexander I, has retained its location in relation to Pushkin, even when the poet was threatened with exile to Siberia for “freethinking” poems and epigrams to the Emperor.

Trying to protect his subordinate, Kapodistrias actually went against the main “enforcer” of the time — an influential General Alexei Arakcheyev, also became a target of Pushkin. Through connections at the court of the foreign Minister was able to achieve in this film is milder southern exile, during which he, in particular, wrote some of the best poems of the early period.

Pushkin returned to the foreign Ministry already in 1832 on the orders of the new Emperor, Nicholas I, to whom the poet addressed a letter, asking to enroll him in the public service. “The petition was addressed instantly,” wrote the book “Mysteries of Pushkin’s” one of his biographers, Eldar Akhadov. The head of the Russian Empire gives the order of the odious head of the “Third branch” Alexander Benckendorff, who was also in charge of the foreign Ministry. Nicholas I ordered to give instructions to the Minister of foreign Affairs, count Karl Nesselrode and Pushkin to enroll in the service.

This period of work in the Ministry of foreign Affairs Pushkin almost had to do an “information war” during the Polish campaign.

He writes quite a hard poem “to Slanderers of Russia”, which was published in the brochure “the capture of Warsaw” in 1831. “What do you make a noise, folk opment? Why do you threaten Russia anathema?”, — this verse of the poet is still considered one of the most popular conservative Patriotic environment.

As writes the conservative Russian writer Anatoly Klepov, a brochure was published to counteract the campaign of slander in the Western press against Russia’s military actions in Poland. The Pushkin translator Julian Henry Lowenfeld told “Газете.Ru” that although Pushkin was “the courtier”, he “belonged to no camp.”

Travel abroad, working in the archives

Although Pushkin and served in the foreign Ministry, outside the Russian Empire, he was not, except for the famous trips to Erzurum, located in the North-East of present-day Turkey, where they were Russian military units. His account of the journey reads like a real field report.

“Ekaterinograd (inhabited locality on the territory of present Kabardino-Balkar Republic. — “Газета.Ru”) starts on the Georgian military road and postal route stops. Hire horses to Vladikavkaz. Given the convoy Cossack and infantry and one gun. Mail is sent twice a week, and travellers to join her: it’s called opportunity,” was described by Pushkin on his journey.

In January 1835, Pushkin, being in the rank of titular counselor, appealed to Nicholas I with a request for admission to the Senate archives to see the investigation materials in the case of the rebel Pugachev.

Despite the fact that the “History of the Pugachev rebellion” is already out, Pushkin was still interested in the figure of Pugachev.

The king that gave permission, but the materials of Pushkin was not satisfied and he appealed to the native mid — to the Director of the State archive of the foreign Ministry Vasily Polenov. Need the document again was not found, but the poet received a “meeting about a villain Pugachev many papers in the book are intertwined”.

Pushkin worked in the Ministry of foreign Affairs before the end of his life, torn by a bullet Georges Dantes in February 1837

Appointing a meeting on Pushkin square in Moscow under the monument to the poet work of the famous sculptor Alexander Opekushin, few people think that the idea of its creation was proposed by the Russian diplomats.

In 1855, the years of the 82 employees of the Ministry of foreign Affairs sent a letter to Prince Alexander Gorchakov, asking to erect a monument to Alexander Pushkin. 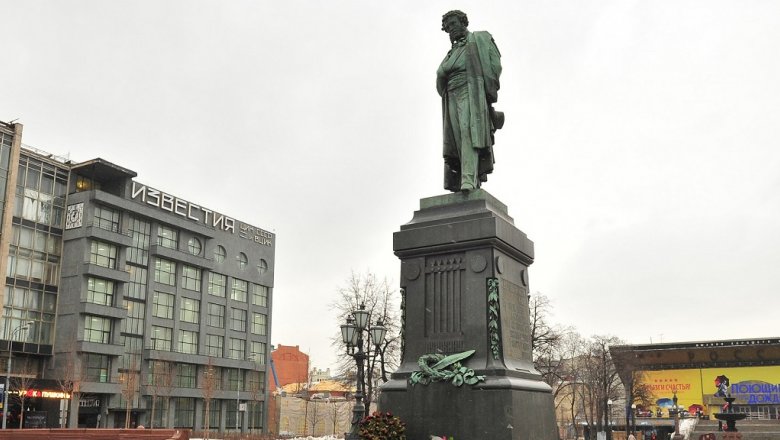 A year Gorchakov will take the post of foreign Minister after the resignation of count Nesselrode. However, the monument of the poet will be installed in the 1880s already at the end of the Ministerial career Gorchakov — one of the two surviving companions of Pushkin Tsarskoye Selo Lyceum.

It is worth noting that foreign Minister Sergei Lavrov, not so long ago turned to Pushkin, quoting it in his article “Historical perspective of Russian foreign policy” in March last year, when concerned the history of the Mongol invasion: “the barbarians did not dare to leave at the rear of enslaved Russia, and returned to the steppes of their East. Christian education was saved ravaged and expiring Russia.”