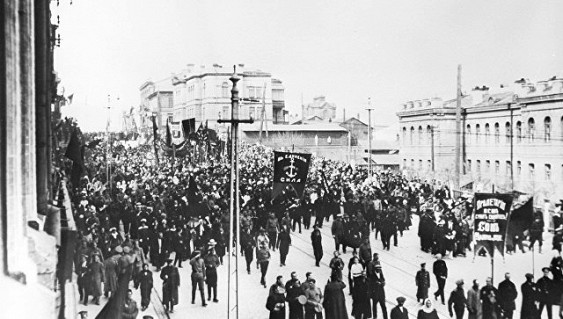 “Communists of Russia” suggest to adopt the law “On administrative liability for denial of historical facts and distortion of the nature of the events concerning the October revolution of 1917, its proposals the party sent to the Chairman of the Duma Vyacheslav Volodin, said on Friday, RIA Novosti Deputy Chairman of the party Sergey Malinkovich.

In 2017 we will celebrate 100 years of revolution in Russia. In the February-March days of 1917, the autocracy fell, and power was in the hands of the Provisional government, and on 25 October 1917 it was overthrown by the Bolsheviks in Petrograd.

The Chairman of the Federation Council Committee on defense and security Viktor Ozerov in early January noted that the non-systemic opposition attempts to split the society in the election in 2017, which will mark the 100th anniversary of the October revolution, and will try to use these historical events in their favor.

“Communists of Russia” and the allies of the party initiating the draft law on liability for denial of the storming of the Winter Palace and revolutionary character of the events of October 1917,” said Malinkovich RIA Novosti on Friday.

According to him, the party proposes to adopt the law “On administrative liability for denial of historical facts and distortion of the nature of the events concerning the October revolution of 1917” proposals batch sent Volodin.

In document available to the RIA Novosti, the Chairman of the party Maxim suraykin refers to the Chairman of the state Duma with a request to consider making legislative initiatives for the anniversary of the revolution. In his letter suraykin noted that a number of political figures, including representatives of the liberal and right-wing forces oriented toward Western values, in recent years, “often alleges that the fact of the rebels storming of the Winter Palace – the residence of the Pro-Western Interim government on 25 October 1917 was not, as there was no historical shot of the cruiser “Aurora”, recently renovated at the expense of the state budget”.

According to him, representatives of “these destructive forces,” called the revolution of 1917 “coup d’etat”. “All this brings confusion and discord in Russian society, contrary to obvious historical facts, desorientiert new generation of Russians,” writes suraykin.

“In order to respect the historical truth, the consolidation of society and the creation of a proper social atmosphere in the eve of the celebration of the 100th anniversary of the great October Socialist Revolution at the state level Kommunistichekaya party the Communists of Russia as the largest non-parliamentary party of the country, urges the State Duma to adopt the law “On administrative liability for denial of historical facts and distortion of the nature of the events concerning the October revolution of 1917 year”. This law should provide for administrative liability for denial of generally known historical facts: the storming of the Winter Palace the rebels, a shot of the cruiser Aurora at the winter Palace, for the qualification of the October revolution as a “coup”. We are talking about public speeches, or publications. Recognized in court guilty of the above violations of citizens should be involved in socially useful work or to pay a fine in the amount of 50 minimum wages. In the future it would be possible to consider strengthening of the responsibility up to criminal”, — says in his letter suraykin.

In his opinion, set out in the document, the adoption of such law will allow in the business and a festive atmosphere to celebrate the anniversary of the revolution, to prevent speculative and destructive performances of forces seeking to disrupt stability in the Russian society. “Ready to allocate lawyers from among the representatives of the party for the preparation of the bill, together with the structures of the State Duma of the Federal Assembly of the Russian Federation”, — said suraykin.

Russian President Vladimir Putin during the announcement of the message to the Federal Assembly said that the centenary of the February and October revolutions in 2017 is a significant reason to address the causes and nature of revolution in Russia.