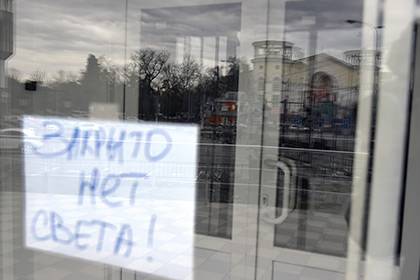 In 88 settlements in the Crimea was a power cut. The reason was adverse weather conditions. On Friday, December 30, reports the Ministry of energy.

The problems began at 11:00 local time (coincides with Moscow). “Without electricity remained part of the household consumers (about 27 800 people) in the cities of Sudak and Sochi, in 88 settlements Simferopol, Red Perekop, Feodosia, Kerch, Yevpatoria and may day areas”, — stated in the message of the Ministry.

The head of the Crimea Sergey Aksenov said that the instructions to troubleshoot this already. “I think that all will end happily, New year all Crimeans with the light will meet”, — quotes its RIA Novosti.