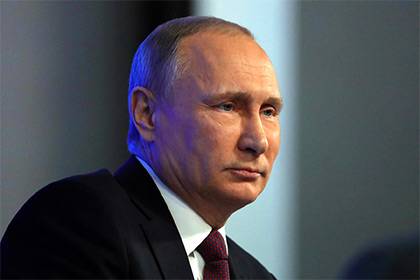 Russian leader Vladimir Putin in a congratulatory letter to President-elect of the United States Donald Trump expressed hope for the restoration of constructive relations between States. On Friday, December 30, reported on the Kremlin website.

The challenges countries faced in recent years, confirmed that “Russian-American relations remain an important factor of stability and security in the modern world,” Putin said.

Earlier, the Russian leader congratulated the current President Barack Obama with the upcoming holidays, despite his decision to expel from the United States to Russian diplomats.

The President also sent his congratulations to the leaders of all CIS countries, except for the President of Ukraine Petro Poroshenko.

23 Dec trump said of the holiday message from Putin. He expressed hope that both countries will strive for constructive cooperation, and not “go alternative way.” Earlier in the day, the Russian President promised to visit US if he gets an invitation from a Republican.

Trump was elected President of the United States for the election held on 8 November. The same day Putin was one of the first congratulated the new us leader a telegram in which he wished it successes on a post of the head of state. Trump takes office on 20 January 2017.