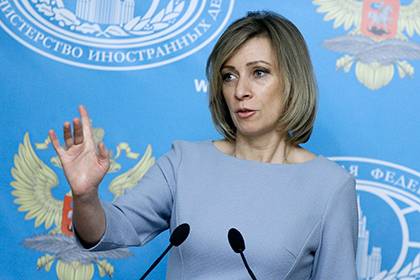 The official representative of Russian foreign Ministry Maria Zakharova said that the information about the closure of the Moscow school, which caters to children of employees of diplomatic missions of the United States, Britain and Canada, not true. She wrote about it in Facebook.

“American officials “anonymous, providingull” your media that in response, Russia closed an American school in Moscow. It’s a lie. Apparently, the White house really mad and started to come up with sanctions against their own children,” — said Zakharov.

She also asked the journalists not to write: “Moscow has denied… or will not…”. “Write like it is: “CNN and other Western media once again referring to the American official sources spread the false information” Usually Santa Claus asking for anything. This year I’m going to ask him, someone to take”, — the diplomat added.

December 29, CNN reported that Russia in response to new sanctions adopted decision on the closure of the Anglo-American school in the capital. In addition, according to the interlocutor of the channel, close access to the holiday home of the American Embassy, located in the North-West of Moscow in Serebryany Bor.

Earlier in the day, President Barack Obama announced the imposition of restrictive measures against nine individuals and organizations, in particular the FSB and the GRU. The American leader explained his decision by the fact that, through hacker attacks, Russia tried to interfere in the electoral process in the United States (Moscow such allegations have consistently rejected — approx. “Of the tape.ru”).

The U.S. Treasury has added to the sanctions list two persons who, acting in cyberspace, facilitated the theft of money and personal information. In addition, the state Department decided to expel 35 the Russian diplomats.

Moscow has promised an adequate response will follow, based on the principles of reciprocity.