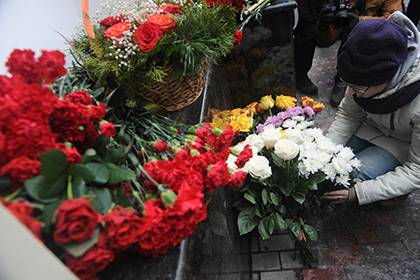 In Mytishchi near Moscow was held the funeral of the first identified victims of the disaster Tu-154. On Wednesday, December 28, reports the TV channel “360”.

Assistant of the head of the Department of culture of the Ministry of defense of Russia Oksana Badrutdinova buried at the Federal military memorial cemetery. The ceremony was held behind closed doors. Badrutdinova died in the 33rd year of life.

The Russian defense Ministry aircraft Tu-154, bound for the Syrian Latakia, fell into the Black sea a few minutes after departure from the airport of Sochi, which hosted the refueling. Killing 92 people: artists of the song and dance ensemble of the Alexandrov, journalists, military servicemen, Executive Director of the Fund “Fair aid” Elizaveta Glinka (known as Dr. Lisa).

Practiced several versions of what happened, but the deciphering of the flight recorders has allowed to narrow down their list. It was reported that, according to the transcript of the cockpit voice recorder, the conversation in the cockpit is interrupted by shouting, “Guards, bitch!”. After that are the words “Commander, fall!”. According to the source, the film voice of the black box was not injured in the crash.