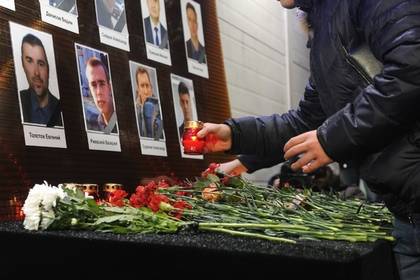 Identified two of the dead in the crash of Tu-154 Russian defense Ministry. About it reports on Monday, December 26, RIA Novosti citing a source in law enforcement bodies.

According to the news Agency, we are talking about the commander of the crew, Roman Volkov and the assistant chief of the Department of culture of the Ministry of defense Oksana Badrutdinova.

In turn, the press service of the defense Ministry reported the identification of relatives of one of the victims whose body was delivered to Moscow. “For ethical reasons we won’t mention the names of the victims, identified by relatives without their consent”, — added in Department.

Earlier, a source in law enforcement agencies reported that the divers raised from the bottom of the Black sea, the body of Roman Volkov. To identify it succeeded thanks to the insignia on the form. In addition, the surface was raised 70 parts.

It was also reported that Moscow had identified the body of one of the victims of the disaster over the Black sea. His name was not specified.

Transport Minister Maxim Sokolov, who heads the government Commission investigating the disaster, said that the identification of the remains will be held exclusively in Moscow.

Tu-154B-2 Russian Ministry of defense fell on the morning of 25 December shortly after departure from Sochi (this city he sat down to refuel, taking off from near Moscow Chkalovsky). The plane was heading to Latakia (Syria). Killing 92 people: 84 passengers and eight crew members. The investigation is considering four main versions of the disaster, a terrorist attack is not among them.