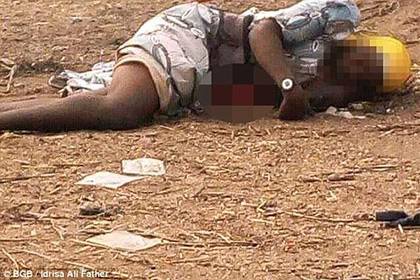 The crowd in the Nigerian city of Maiduguri killed a woman who was unable to operate fixed to the body belt of a suicide bomber. About this newspaper The Daily Mail.

The terrorist came to the city market of cattle along with a partner. That was blown up — killing, really, only themselves. Then the visitors drew attention to the second woman. She several times tried to bring explosives into the action, but it didn’t work out. She was knocked to the ground and killed. Police removed the bomb from the body of hapless suicide bombers.

None of the terrorist groups has claimed responsibility for the attack, but the authorities believe that the bombers would send the organization the “West African province of the Islamic state”, formerly known as “Boko Haram”.

24 Dec in Nigeria, announced the capture of the last stronghold of the terrorists. “The head of staff of the army informed me that the camp fell on 23 December at 13:35 and the terrorists fled, and they have nowhere else to hide”, — declared the President of the country Mohammad Bukhari. According to him, the “fall “Camp Zero” marks the final defeat of the terrorists from the “Boko Haram” in their last enclave in the woods Sambisa”.

The capture of the extremists was the result of a large-scale offensive of the Nigerian army. According to military, fighters flee from the forest Sambisa, residents in the surrounding area are asked to be alert and actively assist the militias.

The group “Boko Haram” (translated means “Western education is a sin”), established in 2002, operates mainly in the territory of Nigeria. Supporters of the organization in favor of the introduction in the country of Sharia law and the fight against Western influence.

In April 2015 she changed her name to “West African province of the Islamic state.” This was done after the organization’s leader, Abubakar Shekau has sworn allegiance to the terrorist group “Islamic state” (banned in Russia).