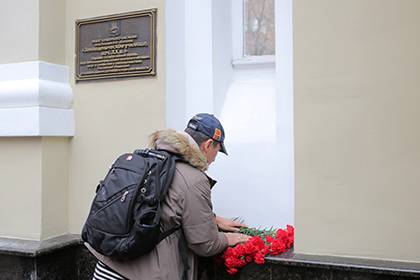 Monday, December 26, declared in Russia by day of national mourning. Such decision in connection with the plane crash over the Black sea, was made by President Vladimir Putin.

In addition, the Russian leader decided to lower a little national flags throughout the country; to offer cultural institutions and broadcasting companies to cancel entertaining actions and transfers; to take necessary measures on rendering assistance to families of the victims.

In a plane crash involving aircraft Tu-154B-2 223-aircraft division of the Ministry of defense killed 92 people: 84 passengers and 8 crew members. On Board were the artists of the song and dance ensemble of the Alexandrov, headed by Director Valery Khalilov, the journalists of the three TV channels (First, the “Stars” and NTV), the military, and a few others, including the Executive Director of the Fund “Fair aid” Elizaveta Glinka (known as Dr. Lisa) and the head of the Department of culture Ministry of defence Anton Gubankova.

The plane disappeared from radars at 05:27 MSK on December 25 after taking off from Sochi. Where he came from near Moscow Chkalovsky to refuel. The aircraft, bound for the Syrian Latakia, fell almost immediately after takeoff.