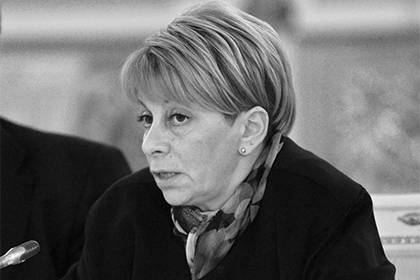 The head of the Chechen Republic Ramzan Kadyrov has decided to name Elizaveta Glinka (known as Dr. Lisa), who died in the plane crash of Tu-154 to Sochi, the Republican children’s clinical hospital in Grozny. He said this in his Instagram.

“She devoted her life to the noble cause of saving children from the hot spots. Having a wonderful medical education, she could easily work in any hospital, but Elizabeth chose a difficult path of supporting those who can’t get help,” — said the head of Chechnya.

Heavy loss for the whole of Russia called Kadyrov and the death of the artists song and dance ensemble of Alexandrov. “Along with the artists were killed and art Director, Lieutenant General, people’s artist of Russia Valery Khalilov. The ensemble has earned international fame. He for decades has performed in many countries. The artists were inspired by the soldiers and sailors of our country in military exploits,” wrote Kadyrov.

Khalilov decision of the head of the Republic was posthumously awarded the medal “For merits before the Chechen Republic”.

“I am sure that the names of these great men will be forever inscribed in the history of Russia”, — concluded Kadyrov.

Earlier, the Minister of defence of Russia Sergey Shoigu took a decision to assign one of the military medical institutions.

Sunday, December 25, the head of the presidential Council for promoting civil society and human rights Mikhail Fedotov has proposed to perpetuate the memory of Glinka. “She was a person absolutely unique. It was really an angel of goodness, which came down to us on earth to do good for others. It was her mission,” he said.

Hlinka was among the passengers of the Tu-154 of the Ministry of defense, which crashed near Sochi. The plane, EN route to Latakia, disappeared from radars at 05:27 GMT 25 Dec. The aircraft fell almost immediately after takeoff. All on Board were 92 people, including artists of the song and dance ensemble of the Alexandrov Russian journalists.