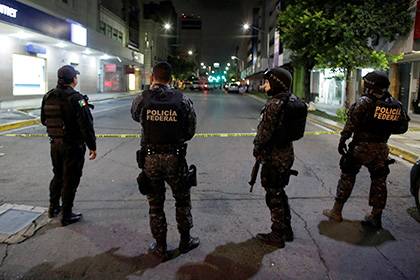 In the two Mexican States on Christmas day as a result of dismantling of drug traffickers killed 13 people. About it reports on Monday, December 26, The Guardian.

Police found six men’s heads cut off in the town of Jalisco, Michoacan. Nor can ID them or find their bodies have not yet succeeded. As the newspaper notes, in recent times in this state, continue violent clashes between rival drug cartels.

Out of state Guerrero — gunmen stormed a house and shot a married couple and another family of five. Three of those killed were police officers. According to preliminary data, the attackers planned to kill one of the guards, however, eventually shot and killed all those in the house.

Guerrero is one of the most dangerous Mexican States — there are frequent disassembly of the local gangs. From January to October this year in the region was made more than 1.8 thousand murders.

One of the most high-profile cases was the abduction and murder of 43 students, who wanted to make a protest against education reform, in the fall of 2014. They were attacked by police, who handed them over to the Guerreros Unidos drug cartel. Its representatives have dealt with the students, thinking that they are members of a rival gang. The death of the students was confirmed in January 2015.