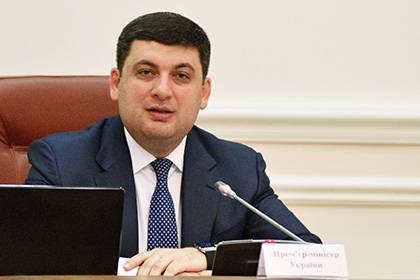 Prime Minister Benjamin Netanyahu has decided to cancel the visit of the head of the Ukrainian Cabinet of Ministers Volodymyr Groysman, who was to arrive in Israel next week. This writes the newspaper Haaretz.

A senior official in Jerusalem said that the decision was taken in light of the Ukraine vote in support of UN security Council resolution criticizing Israeli policy of settlement of the Palestinian question.

As the newspaper notes, Groisman, the first Jew Prime Minister of Ukraine, was appointed in April 2016, he has a family in the Israeli city of Ashdod. Before his election as Prime Minister Groysman was the mayor of Vinnytsia, where he was known to have taken an active part in Jewish community life and the strengthening of its relations with foreign countries, especially Israel.

On 23 December the UN security Council approved a resolution, demanding tel Aviv to stop settlement construction in the occupied Palestinian territory. Voted “for” 14 members, the United States, on which Israel waited for the blocking of the resolution, abstained. President-elect Donald trump said that Washington had to use its veto.

In the office of the Israeli Prime Minister the decision of the security Council called anti-Israel and shameful and refused to implement it.