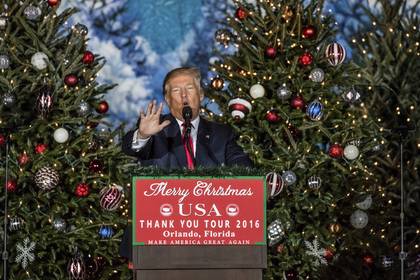 Donald trump has promised change in “all that relates to the UN” after his inauguration for President of the United States. About it he wrote on Friday, December 23, Twitter.

“Everything about the UN change after the 20th of January,” he promised.

Previously, trump has urged the United States to block a resolution prohibiting Israeli construction in Palestine.

On 23 December, the UN Security Council adopted resolution 2334, requiring Israel to stop building settlements in the occupied Palestinian territories. The document was supported by all security Council members except the US, which abstained. Five years ago, during the consideration of the same resolution, the Washington vetoed.

US Ambassador to the UN Samantha Power said that the continued construction of settlements “seriously undermines the security of Israel.” “You cannot defend the expansion of Israeli settlements and support the establishment of two States that would put an end to the conflict. Have to make a choice between settlements and the separation [of Israel and the Palestinian authority]”, — quotes words of the diplomat to Reuters.

The U.S. position has been criticized in the Republican party. The speaker of the house of representatives Paul Ryan called the decision to abstain was “absolutely shameful,” and Senator John McCain expressed the view that the way the United States was “complicit in the blatant attack.”

In turn, the energy Minister of Israel Yuval Steinitz, who is considered a confidant person of Prime Minister Benjamin Netanyahu, said that the US is not becoming to block a resolution, “simply abandoned his only friend in the middle East”.

Previously the permanent representative of Israel to the UN, Danny Danon called the proposed project is the height of hypocrisy. Netanyahu urged the United States to use its veto to block the resolution.

September 22, Palestinian President Mahmoud Abbas called on the UN security Council to prohibit Jewish settlement in Palestine. The Palestinian leader also proposed to declare 2017 as the International year of the end of the Israeli occupation of Palestinian land and the Palestinian people.