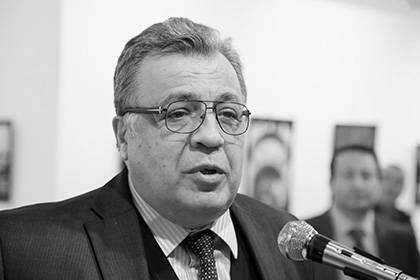 The investigation of the assassination of the Russian Ambassador in Ankara, Andrey Karlov was established that the crime is not the result of personal initiative of the terrorist attack was planned. As reported by Anadolu, said the interior Minister of Turkey Suleyman Soylu.

“We try to identify when a terrorist inside Turkey and beyond. At this stage, clearly identified the link killer with a terrorist for of Fethullah gülen”, the Minister stated, putting that the attack on Charles is the result of the action of forces, trying to stop the efforts to achieve peace in the middle East.

Soylu said that the terrorist attacks that occurred in Turkey after the parliamentary elections on 7 June 2015, and an armed attack on the diplomat are interrelated and form a single chain plan.

“Turkey and Russia will not fall for such traps. The political will demonstrated by Moscow, is evidence of this and it gives us hope. I again Express my condolences to Russia and to the friendly Russian people”, — said the Minister.

62-year-old Charles was killed on 19 December. He was shot during a speech at the opening of the photo exhibition “Russia through the eyes of the Turks” in the modern art Gallery in Ankara. The killer, 22-year-old police officer mevlüt MERT Altıntaş, was soon eliminated by the security forces. By agreement with the Turkish authorities in the investigation of crime will be involved investigative team of 18 security officers, the Investigative Committee and the Ministry of foreign Affairs.