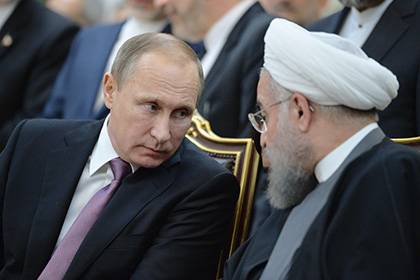 Russian President Vladimir Putin discussed with President of Iran Hassan Rouhani the situation in Syria. This was reported on the Kremlin website.

The interlocutors stressed that the successful conclusion of the joint efforts of the operation to free Aleppo from militants is an important step towards complete victory over international terrorism in Syria and establish peace in the country.

The presidents agreed to continue close coordination to facilitate the achievement of a political settlement of the Syrian crisis. This refers, in particular, carrying out in Astana of the negotiations in order to reach concrete agreements.

Rouhani also expressed sincere condolences in connection with the murder of the Russian Ambassador in Turkey Andrey Karlov.

62-year-old Charles was killed on 19 December in Ankara. He was shot during a speech at the opening of the photo exhibition “Russia through the eyes of the Turks” in the Gallery of modern art. The assailant is 22-year-old policeman mevlüt MERT Altıntaş — was soon eliminated by the security forces.

On December 22 the Syrian army announced the restoration of full control over Aleppo. On the same day from the city was evacuated the last group of militants.