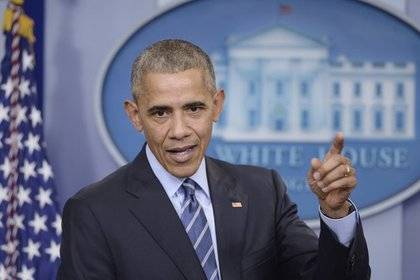 President Barack Obama signed the law on defence spending in 2017, which restricts military cooperation with Russia, gives a global status to the “Magnitsky act” and provides for the supply of weapons to the Syrian opposition. About it reports on Saturday, December 24, RIA Novosti.

The document specifically prohibits the US Department of defense to allocate in 2017 fiscal year funds for military cooperation with Moscow until such time as the Pentagon in coordination with the U.S. Department of state notifies Congress that Russia stopped “occupation of the territory of Ukraine and the aggressive actions that threaten the sovereignty and territorial integrity of Ukraine and members of NATO.”

Separately stated prohibition on funding for “any actions” that recognize Russian sovereignty over Crimea. The exception may be cases related to the national security of the United States.

The document also provides for the allocation of $ 4.3 billion for “containment of Russia”. These funds will be used for “political, economic and public diplomacy” and military support to NATO allies and other U.S. partners in Europe and Asia.

In addition, the law on defence spending allows the U.S. President to impose sanctions against anyone who, according to Washington, involved in corruption and human rights violations. The sanctions include blocking of property or assets under the jurisdiction of the United States.

In addition, the document reglamentary supplies to the Syrian opposition that support the US actions to combat terrorism, man-portable air defence systems (MANPADS) and other weapons. To provide military assistance to the Secretary of state and the Minister of defence will be required to inform Congress and get its approval.

“The Magnitsky law” passed in the US in December 2012. The document was originally directed against persons allegedly involved in the death of lawyer Sergei Magnitsky in prison in 2009. The list has been those who have been personal limitations. Later the list was supplemented with the names of those whom the United States suspected of human rights violations. Sanctions constitute a prohibition on entry and the arrest of all accounts of the defendant list in American banks.

In September, Deputy Russian foreign Minister Mikhail Bogdanov has warned that supplies of the US and its allies of the Syrian opposition new weapons, including anti-aircraft weapons — is counterproductive, and this weapon can be used against the United States.