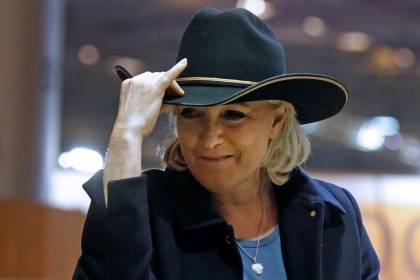 Contender for President of France and head of the party “national front” marine Le Pen has promised in case of victory to lead the country out of NATO and the European Union. She stated this in an interview with the Greek newspaper Dimokratia, published on the website of the broadcasting company ERT.

According to Le Pen, she plans to hold a Frexit — analogue of Brexit — and calls to join Portugal, Spain, Ireland, Greece and Cyprus. “People should have the opportunity to vote for the liberation from slavery and blackmail, promoted by the bureaucrats in Brussels, to return to their countries sovereignty,” — said the politician.

“The British have realized this and voted to secede from the EU, but they did not think never having to replace its pound to the Euro. In the Eurozone, high prices, taxes and unemployment, wages and pensions are falling, people become poorer. When Britain threatened the same thing, they devalued the pound, and soon began again economic growth. And our development prevents the IMF,” — said Le Pen.

The head of “National front” also sees no reason to stay in NATO. “This organization came in response to the danger posed by the Warsaw Pact (Organization of the Warsaw Pact was created six years after NATO — approx. “Of the tape.ru”), and the expansionism of the Communist Soviet Union, she said. — But the Soviet Union is no more, and no Warsaw Pact. NATO Washington needs to advance its objectives in Europe.”

On 22 December, Le Pen made a similar statement: “I told the French that if they’ll have me, I will go to Brussels to begin negotiations on the return of our sovereignty. And six months after my election to organize a referendum”.