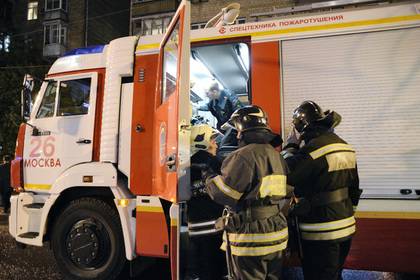 The hangar caught fire in the South-East of Moscow. On Friday, December 23, reported on the website of the Moscow Central Board MOE.

Information about the fire in the area of building room 10, building 1 at Perovsky highway came to the office on 23 December at 21:40 GMT. It was later updated address of incident, street Moscow, the house 16, building is located in the industrial area.

As follows from messages on the website of the Ministry of emergency situations of Moscow Twitter, at the moment the fire area makes about thousand square metres. On-site emergency work 25 units is 88 people, they are trying to prevent the spread of fire.

Earlier in the press service of the Metropolitan emergency departments, “Interfax” was told that the fire area is about 300 square meters, and the roof of the burning building, according to preliminary data, were seen two people.

On 9 December it became known about one dead as a result of a fire in an apartment house in the South-East of Moscow. The fire occurred at the Ryazan Avenue. It was reported that firefighters managed to rescue six people. The cause of fire could become careless handling of fire.