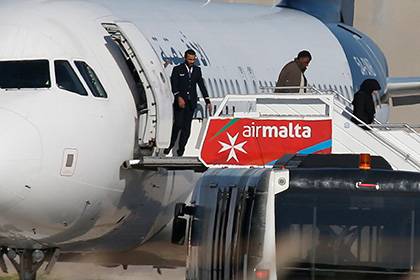 The hijackers of Libyan aircraft released several hostages. About it reports TV channel TVM, which leads the live broadcast.

The Prime Minister of Malta Joseph Muscat in his Twitter confirmed that this is the first group of 25 people, consisting of women and children.

Attackers require to provide safe passage for the rebels, surrounded by government forces near the city of Benghazi.

Presumably, two of the hijackers belong to a previously unknown group, “al-Fath al-Jadida”.

Earlier it was reported that on Board the liner is at least one invader, armed with a grenade. Presumably, he is a supporter of former Libyan leader Muammar Gaddafi.

On 23 December, the aircraft A-320, carrying out domestic Libyan flight Sabah — Tripoli was hijacked and landed at Malta international airport. On Board were 111 passengers and seven crew members. Among the hostages are 82 men, 28 women and a small child.