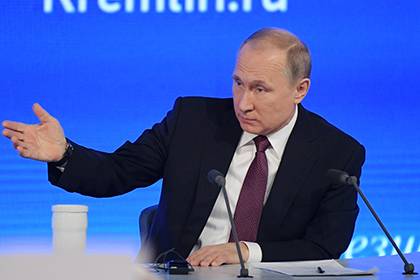 Russian President Vladimir Putin said that presidential elections planned for 2018 can be transferred. Such statement the President made during a press conference held on Friday, December 23, the correspondent “Tapes.ru”.

“Possible, but impractical,” — said the head of state on the question of the journalist of The Wall Street Journal, before adding about what kind of country it is.

November 7, the official Kremlin spokesman Dmitry Peskov said that the rumors of early elections of the President of Russia are “absolute scholasticism”, and stressed that such a “question on the agenda of no.”

At the same time Vice-President of the Russian Association on public relations Evgenie Minchenko expressed the view that messages appearing on the early start of the presidential campaign in Russia is connected with the elections in the United States.

Putin, who is now 64, took over as President in 2000 and reelected in 2004. After that, he headed the government of the country, and in 2012 again took the position of head of state.

In Russia, the President is elected for six years on the basis of universal, equal and direct suffrage by secret ballot. The next presidential elections will be held in March 2018.