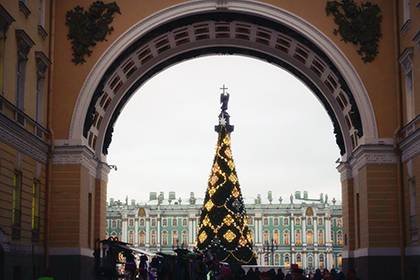 Final installation and test turn on the backlight of the Christmas tree on Palace square in St. Petersburg

Deputy of the municipality of Shushary Artemy Galitsyn asked the Governor of St. Petersburg Georgy Poltavchenko to return a live tree on Palace square. Relevant post he posted on his page in Facebook on Thursday, December 22.

“Now the center of our city is decorated with strange cone, only from a distance resembling a Christmas tree,” wrote the MP. In his opinion, artificial tree deprives the celebrations.

A living tree should be set in anticipation of 2017, which was declared the Year of ecology, I’m sure Galitsin.

“For example, the main Christmas tree can be promoted among citizens careful attitude to one of the most important natural riches of Russia — to the forest. Here we should talk about buying Christmas trees grown in special nurseries, rather than arbitrarily cut black woodcutters”, — said the Deputy.

Artificial fir he proposed to transfer in Shushary, where previously the police caught the “Christmas thief”.

Last week, law enforcement officials detained in the Northern capital man for stealing Christmas artificial trees in one of the courtyards in Shushary, reports the edition “Arguments and facts — St. Petersburg”.

7 December it became known that officials of the administration of the Yarkovsky district of the Tyumen region established on the Central square a half-century of spruce, which, without demand cut down the house 86-the summer woman. In the end mine lost his job.