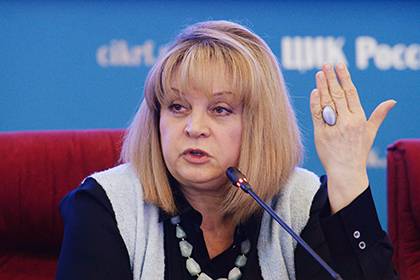 The Chairman of the Central election Commission of Russia, Ella Pamfilova said that to talk about changing the law governing the conduct of elections. So she commented about the possibility of abandoning the unified voting day, RIA Novosti reported on Thursday, December 22.

“I don’t know who gives these all kinds of speculation. Used to talk about all this. This is an internal meeting and we are discussing our position on a range of issues,” — said the head of the CEC, stressing that it is incorrect to provide the media the “raw” information.

Proposals to change the legislation are the opposite, said Pamfilova. She recalled that President Vladimir Putin has charged to create working group for their consideration.

“When will the working group then will be considered and our proposals is the interaction with the state Duma, Federation Council, presidential administration, the government, then we can talk about something specific,” — said the Chairman of the electoral Commission.

In the Kremlin earlier Thursday, the rumors about the postponement of the single voting day compared with the guesswork. Similar decisions have been made, said press Secretary of Russian President Dmitry Peskov.

21 December, “Kommersant”, citing a source said that Pamfilova admitted the possibility of the abolition of the single voting day, or transfer to another date.

The President signed a law introducing a single voting day in 2012. According to him, the regional elections will be held twice a year (March and October), and only one — the second Sunday of September. Last summer, for autumn, also moved the Federal parliamentary elections.