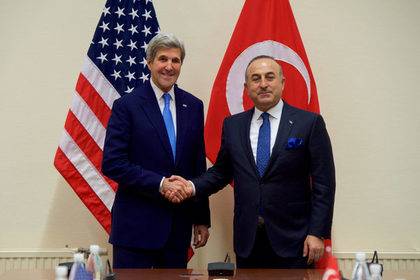 Foreign Minister of Turkey Mevlut Cavusoglu blamed for the murder of the Ambassador of Russia Andrei Karlov on the opposition of the followers of the Islamic preacher Fethullah Gulen. He stated this in a telephone conversation with U.S. Secretary of state John Kerry, reports Reuters, citing a diplomatic source in Ankara.

Kerry, in turn, in conversation with Cavusoglu, Turkey offered assistance in the investigation of the murder of the Russian Ambassador, said the U.S. state Department. Before this he addressed a similar initiative to the Russian foreign Minister Sergey Lavrov.

Initially responsible for the murder of Charles Gulen and his organization, FETO, which Ankara considers a terrorist and accused of attempting to organize a coup, had placed anonymous source in Ankara. The headquarters of the opposition preacher living in the United States said that he condemned the murder of Russian Ambassador Andrei Karlov in Turkey, and has called the accusations against him ridiculous.

Charles died in the attack at the opening of the photo exhibition “Russia through the eyes of the Turks” in Ankara. The gunman was liquidated by the police. According to the Moi, criminal police officer mevlüt MERT Altıntaş. Moscow has described the incident as a terrorist attack.