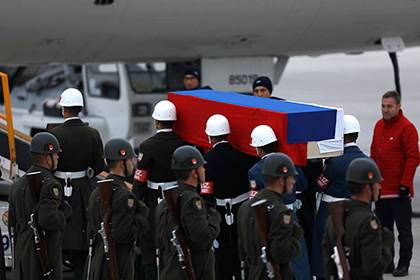 The plane with the body of the murdered in Turkey, the Russian Ambassador Andrei Karlov flew from Ankara to Moscow. About it reports on Tuesday, 20 December, TASS with reference to sources in air traffic control services.

“Just a special flight headed from Ankara to Moscow. About three hours later he landed in Moscow airport Vnukovo”, — said the Agency interlocutor.

In the air port the aircraft will personally meet the Minister of foreign Affairs of Russia Sergey Lavrov. He said this at the General meeting of the Russian Council on international Affairs, RIA Novosti reported. “I will gladly stand before you, and then you go to the airport to meet the aircraft with the body of Andrei Gennadyevich. Eternal memory”, — said the Minister.

In Ankara before sending the plane held a farewell ceremony with Charles. On the Turkish side at the event, in particular, was attended by the mayor Melik gökçek, the head of the Ministry of internal Affairs of the country, Suleyman Soylu, Deputy Prime Minister, Togrul Tyurkesh.

62-year-old Andrew Charles was shot dead in Ankara on December 19 during the opening of the photo exhibition “Russia through the eyes of the Turks” in the Gallery of modern art. He was attacked by a 22-year-old police officer mevlüt MERT Altıntaş, it liquidated soon after the attack. Apart from the Ambassador, injuring three more people.

The investigative Committee of Russia opened a criminal case under part 3 of article 361 of the criminal code of Russian Federation (“an Act of international terrorism that resulted in the killing of a person”).