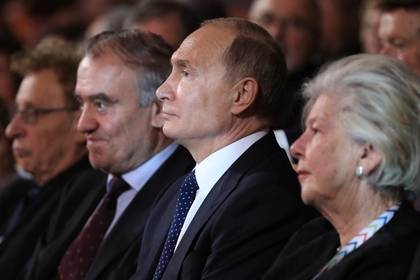 Vladimir Putin at a concert in the Mariinsky theatre, 2 Dec 2016

After the murder of the Russian Ambassador in Turkey, it became known that Russian President Vladimir Putin will not attend the opening of a renovated building of the Maly theater. On Monday, December 19, in his Twitter informed the correspondent of “Komsomolskaya Pravda” Dmitry Smirnov.

Earlier on Monday, press Secretary of the President Dmitry Peskov admitted that Putin in the evening, “if the time will remain,” visit the little theatre, the correspondent “reports Tapes.ru”.

The main building of the theatre was opened after the restoration the play “Woe from wit”. The author of the Comedy diplomat Alexander Griboedov was killed in 1829 in the attack on the Russian Embassy in Tehran. Fanatical mob broke into the Embassy and cut out its employees and had taken refuge in the territory of the Armenians.

Monday, December 19, there was an attempt on the Russian Ambassador in Turkey Andrey Karlov. The diplomat attended the opening of the photo exhibition “Russia through the eyes of the Turks” in the modern art Gallery in Ankara. When he had finished his speech, the room burst into an armed man and shot Charles in the back. The Ambassador died from his injuries. The assailant was eliminated by the Turkish security forces.