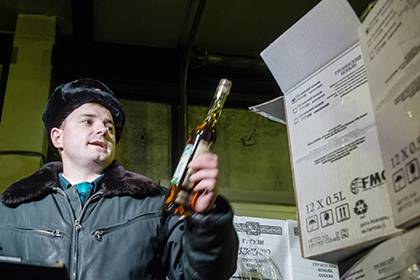 In Sergiev Posad district of the Moscow region the police found the shop on manufacture of counterfeit alcohol and seized more than 100 thousand bottles of liquor adulterated under well-known Russian brands. This was reported on the website of the regional interior Ministry cupola.

“Identified and eliminated workshop equipped with automated bottling line of alcoholic beverages of a full cycle, and storage is ready for the implementation of counterfeit alcohol products”, — stated in the message of the cupola. In addition to alcohol during the inspection, the police found 145 thousand counterfeit excise stamps.

A criminal case under part 1 of article 327 (“the Manufacture, sale of counterfeit excise stamps, special stamps or marks of conformity or their use”). The persons involved in the organization of illegal production.

December 19, Prime Minister Dmitry Medvedev demanded to stop the illegal turnover of alcohol-containing liquids and to bring order to this market.

The statement of the head of the Cabinet was a mass poisoning of inhabitants of Irkutsk who bath concentrate “Hawthorn”, the composition of which was methyl alcohol. According to the latest data, died 55. In the Irkutsk region has declared a state of emergency.