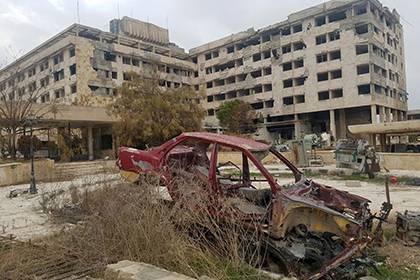 The Eastern neighborhoods of Syria’s largest city Aleppo will be liberated from the terrorists to the evening of December 19. This was stated by the permanent representative of Syria to the UN Bashar al-Jaafari, reports TASS.

“I want to tell you that right now the last of the terrorists in some areas of Eastern Aleppo were evacuated from their strongholds, Aleppo and tonight will be cleared,” — said the diplomat.

This statement ja’afari made after the UN security Council adopted a resolution calling for accommodation in Aleppo international observers to coordinate the evacuation of civilians. The document was supported by all 15 member States of the security Council, including Russia.

18 December, Pro-government forces and rebels in Syria have come to an agreement about the condition of evacuation from East Aleppo, the remaining fighters. The evacuation will resume in exchange for the withdrawal of people from the rebel-occupied the settlements of El-Fua and Kefraya in Idlib province. Under the terms of the transaction, from Aleppo will receive about 1.2 thousand civilians, after about as many people leave the El Foix and Cerau.

A few days before the Syrian militia said the liberation of all areas of Eastern Aleppo. This information was confirmed at the Russian Centre of reconciliation of the warring parties. There’s also said that the operation to withdraw from the Eastern districts of Aleppo of the militants and their family members completed. In total areas, which is controlled by terrorists, exported 9.5 thousand people, including 4,5 thousand fighters.

Aleppo is one of the largest cities in Syria. In 2012, the Eastern part seized various Islamist and rebel groups, and the West remained under the control of the Syrian army. In mid-December of 2016, Syrian troops regained control of the city, and on December 16 it was announced its full release.