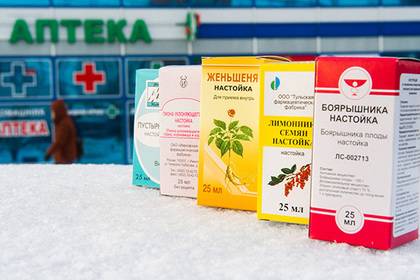 In the Russian Association of chemist’s networks commented on the possible ban on the sale of alcohol-based tinctures, according to the radio station “Moscow speaking”.

“The pharmacy is not affected. At the same tincture of hawthorn there are replacements, such as tablets. And the proportion of medicines containing alcohol, is about 0.2 percent of the total number,” said Executive Director of the Association of Nelli Ignatyev.

After a mass poisoning of inhabitants of Irkutsk alcohol-containing liquid baths, “Hawthorn”, Prime Minister Dmitry Medvedev demanded to stop illegal turnover of alcohol-containing liquids and to bring order to this market. According to him, it is necessary “simply to prohibit the circulation of such drugs.” Medvedev added that some of these liquids indicated that the drug, which can be used inside.

According to the latest data, of the 57 inhabitants of Irkutsk who have suffered in the result of poisoning with alcohol-containing liquid baths, “Hawthorn”, killed 41 people. The majority of the victims were socially disadvantaged. It is noted that on the label of cosmetic products was a warning that it cannot be taken orally. The Federal alcohol market regulatory service said that in the fluid contained methanol and antifreeze. According to the Agency, the products were produced in St. Petersburg on a false document.

In fact the incident a criminal case under part 3 of article 238 of the criminal code of Russian Federation (“Manufacture, storage, sale of goods and products that do not meet the requirements of safety, entailed on imprudence death of two and more persons”).