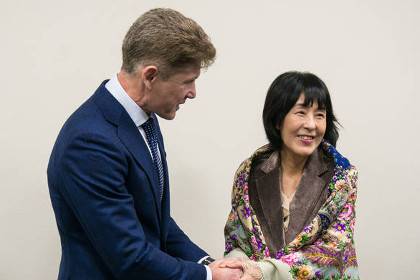 The Sakhalin region Governor Oleg Kozhemyako invited the Governor of the Japanese Prefecture of Hokkaido Harumi Takahashi in the near future to visit his region, in particular, the Southern Kuril Islands. This was reported on the website of the regional administration. Regional leaders discussed issues of cooperation during the official visit of Russian President Vladimir Putin to Japan.

According to Kozhemyako, the Sakhalin authorities are ready to work on all eight areas of cooperation, which was earlier proposed by the Japanese side. It includes the development of transport and port infrastructure, the establishment of health centres, expansion of tourist relations, assistance in the development of the Russian Far East, implementation of projects in energy and agriculture. Also, according to the Sakhalin Governor on public-private partnership it is planned to create on the Sakhalin center for the diagnosis and treatment of cancer.

Also added Kozhemyako, in the Sakhalin region will be in demand in the Japanese experience and technologies in the construction of housing and objects of municipal infrastructure, creation of comfortable environment in the settlements, the organization of production in agriculture and the fishing industry.

The Governor expressed his willingness to provide opportunities for the participation of Japanese companies in projects in the South Kurils — in the construction of housing, roads, the establishment of recycling industries in the field of aquaculture. “I officially invite you to visit the Islands along with Japanese businessmen. To discuss the possibility of conducting joint economic activities on these territories,” Kozhemyako said, referring to Takahashi.

“I think this is a very interesting proposal and I welcome it. However, this issue is in the competence of the Japanese government and it should be developed an appropriate position. The power of Hokkaido hope it will be done soon and on the Southern Kuril Islands will begin a regime of joint economic activity”, — said the Governor of Hokkaido.

Putin visited Japan on 15-16 December. It was the first visit by a Russian leader to this country for the last 11 years. The Russian President and Prime Minister of Japan Shinzo Abe discussed, in particular, economic cooperation between the two countries. In addition, during the meeting they discussed a peace agreement.

After the Second world war between Moscow and Tokyo have not signed a peace Treaty. The main obstacle is the unresolved dispute over the southern Kuril Islands: Iturup, Kunashir, Shikotan and Habomai archipelago.