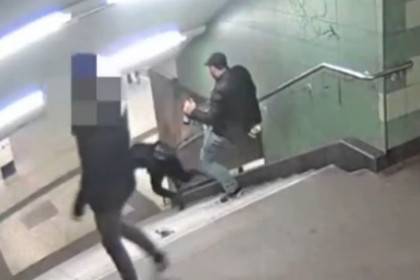 The man who shoved a woman down the stairs in the Berlin subway, arrested, writes Bild. It was them 27-the summer native of Bulgaria Svetoslav stojkov.

One of the passengers of the bus, EN route from the South of France in the German capital, learned of the attacker and told the police. Stoykov met dozens of law enforcement officers. During the arrest he did not resist.

Then stojkov was taken to the criminal investigation Department and interrogated.

In Berlin, a native of Bulgaria, father of three, worked in the kitchen at a restaurant, then in construction.

As the “Nova TV”, stojkov previously lived in Varna, in the Gypsy quarter Maksud. It is known that at home he was convicted of theft and robbery.

The Berlin Prosecutor’s office said that the case is being investigated under article “Causing bodily harm” and “Attempted murder”. Stoykova could face up to 10 years in prison.

7 Dec Bild published the video from the cameras monitoring the Berlin subway who filmed wanton attack on the woman. The incident occurred on October 27. This entry was posted with no sound, which makes it impossible to determine whether there was a conflict between the participants of the scene earlier.