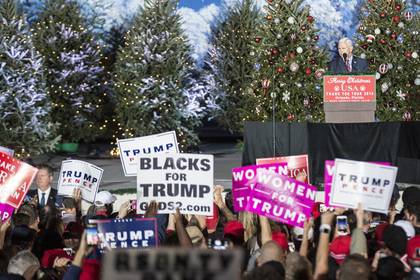 Most Americans do not believe that the actions of hackers has helped the Republican Donald Trump to win the presidential election in the United States. This is evidenced by the results of a joint survey of the newspaper the Wall Street Journal and NBC TV.

So, 57 percent of respondents believe that cyber attacks did not affect the outcome of the vote, 37 per cent hold the opposite point of view, another six percent were undecided.

In the survey, which was conducted from 12 to 15 December, attended by thousands of residents of the United States. The probability of error was 3.1 percentage points.

On December 17 The New York Times reported that President Barack Obama has set two conditions for the application of cyber-weapons against Russia in response to alleged attempts by hackers to influence the outcome of elections. According to the newspaper, it can be used only if their effectiveness in the presence guarantees that Washington will emerge from the conflict victorious.

A day earlier, Obama said that given the intelligence to give him “more confidence in the fact that Russian was behind hacker attacks” on computer systems in the Democratic party. The Kremlin said in response that the United States, groundlessly accusing Russia of meddling in the American elections, are obscene.

Washington has repeatedly accused Moscow of meddling in the election campaign to help Trump. Under the assumptions of the Democrats, in July, Russian hackers broke into the servers of the National Committee of the democratic party, and the party Committee of the Congressional. Expressed and suspicions that Russia allegedly tried to influence the voting by hacking computers. Moscow all charges have been consistently denied.