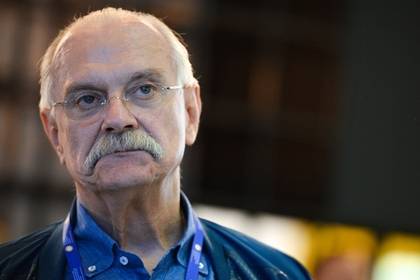 Director Nikita Mikhalkov has shared his opinion about Yeltsin center, which he visited for the first time. On Saturday, December 17, RIA Novosti reported.

“Yes, impressive, impressive,” said Mikhalkov at the exit of the Museum. However, as noted by “Interfax”, answering the journalists ‘ questions, the Director stated that he had not changed his opinion about the demonstrated in the heart of historic cartoon.

“If this is respected the history of the country, it is a lie. I can’t believe it. You say that this cartoon is about the desire for freedom. Where in this cartoon, the freedom that is inherent in us, this slavery? The bias, which is shown here, and in centre Boris Nikolayevich, it leads to more harm Yeltsin himself. This is my point of view,” said the Director.

Mikhalkov visited the exhibition earlier in the day. For this, he specially arrived in Yekaterinburg, where the Museum is housed. A tour of it for the Director was conducted by the Director of the archive center Dmitry Pyshkin.

In Russia in mid-December, a discussion around the Yeltsin centre after he stated that the organization destroys the consciousness of the people, because it gives a biased estimate of the history of Russia.

In the protection centre was made by the widow of the first President Naina Yeltsin, in response, the Director published an open letter, where he tried to explain his position.

The debate was also attended by Minister of culture Vladimir Medinsky and the head of the coordination center of North Caucasus Muslims Ismail Berdiev.

The Yeltsin center was opened in Yekaterinburg in November 2015. There are Museum, library, archive, educational and children’s centres, and exhibition halls.