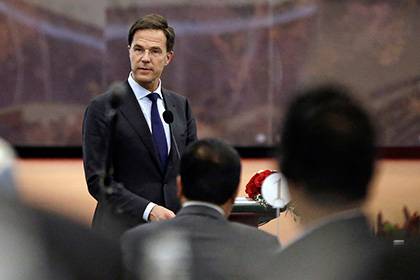 The government of the Netherlands will introduce the Association agreement of EU and Ukraine for ratification to its Parliament in January 2017. About it RIA Novosti said the head of government of the Kingdom mark Rutte.

“I think that will be a political debate next week. We will submit the law to Parliament, I think, in January. Then the Parliament must take a decision on the procedure,” he explained. “I think, based on what I heard at the debate yesterday, they want to speed up the process, they don’t want it to tighten, they want to complete it as quickly as possible,” added the Prime Minister.

Previously Rutte, however, expressed doubt that the Dutch Parliament will ratify the agreement. “In my estimation, if we conclude a good agreement, I will have a chance to convince the Parliament to adopt the document. It is not clear yet, it will be difficult,” he said.

The results held on the same day of the EU summit, Ukraine was denied the right to become a candidate for EU membership, as well as providing military guarantees and additional funding.

The Dutch government is actively seeking ways to change the conditions of the Association agreement EU-Ukraine to ratify it based on the results of the referendum in which 60 percent of voters in the Kingdom voted against approval of the document. The results of the plebiscite are Advisory in nature.

The Association agreement of Ukraine with the EU, signed in June 2014, ratified by the parliaments of all member countries of the European Union, including the Netherlands. In case of revocation of signature any state under this document it will be considered invalid.