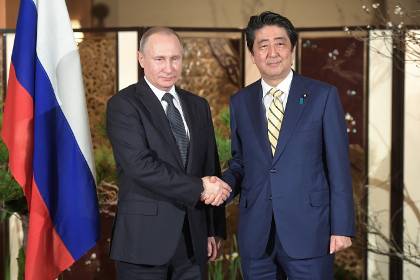 “We yesterday Nagato held detailed talks with the Prime Minister, during which discussed the state of the whole complex of Russian-Japanese relations, including political issues, the possibility of concluding a peace Treaty,” — said the Russian leader.

Putin also said that there is an opportunity for a more detailed discussion about the cooperation of Russia and Japan with the participation of the business community.

“Now there is an opportunity for a more detailed discussion on issues of trade-economic and investment cooperation with the participation of representatives of governments and business circles”, — said the President.

“I believe that the joint work on the economic track will help to create the Foundation necessary for forging a true partnership between the two countries. The economy of Russia and Japan are complementary and virtually no competitive conflicts,” said Putin.

The Prime Minister of Japan Shinzo Abe, in turn, said that in seven months managed to flesh out his proposed plan to work together with Russia. “It took seven months after I proposed a plan of cooperation. During this unprecedented time, we quickly fleshed out the plan with the active participation of interested enterprises of the two countries,” he said.

The Russian President is visiting Japan. The first part of the talks with Abe took place on Thursday, December 15, Nagato, the second is scheduled for Friday and will be held in Tokyo.