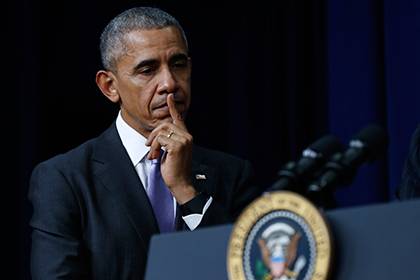 The United States will respond to alleged Russian cyber attacks aimed at intervention in the U.S. presidential election. The President Barack Obama warned Russian leader Vladimir Putin during their meeting at the G20 summit, which was held on September 5 in Xuanzhou Chinese. The content of the meeting, Obama revealed in an NPR interview, excerpts of which publishes NBC News on Friday, December 16.

According to Obama, some of the responses can be open and public, others hidden. “Mr. Putin is well aware of my feelings about this, because I told him about it,” Obama said.

Earlier, on December 15, the NBC issued a statement of an unnamed American intelligence officials about the personal involvement of Russian leader Vladimir Putin to hacker attacks on the server of the US Democratic party.

One of the high-ranking interlocutors in the intelligence of NBC stated that the original goal of Putin supposedly was the place of the candidate in US presidents from Democrats Hillary Clinton. Then efforts were directed to the demonstration of the corruption of American politics and attempts to split the ranks of key U.S. allies at the “help create the idea that [other countries] can no longer rely on the United States as a reliable world leader.”

On the same day former British Ambassador to Uzbekistan Craig Murray, in an interview with The Daily Mail said that the correspondence of the chief of staff, Clinton John Podestà, published by WikiLeaks during the presidential campaign in the United States, became public thanks to the insiders in the Democratic party of the United States, not the Russian hackers. The diplomat says that he personally received the documents from an informant in a wooded area near Washington.

“I don’t understand why the CIA said that information came from Russian hackers, when they should know that this is not so,” said Murray.

The first part of the array of materials, now known under the title “letters Podestà”, was published on 7 October this year. “In the letters address issues of nuclear energy, as well as donations to the Clinton Foundation, from the extraction of mineral resources”, — said the founder of the site Julian Assange.

The dissemination of these data is the former candidate for US presidents from Democratic party Hillary Clinton and us officials accused Russia.