Militants driven out of all neighborhoods of Aleppo

MOSCOW, 15 Dec — RIA Novosti. Government troops and the militia complete the liberation of Eastern Aleppo by the terrorists, said at the briefing Deputy head of the main operations Directorate of the General staff of armed forces of Russia the General-Lieutenant Victor Pozniki. 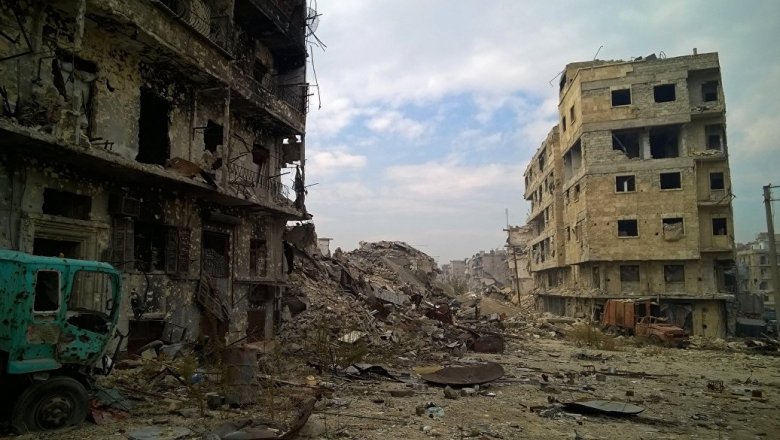 “As a result of offensive actions of the militants driven out of all neighborhoods under their control. The Syrian army during the fighting, eliminated more than 900 terrorists killed dozens of pieces of heavy weapons and military equipment,” — he said.

Deputy head of main operational Department of the General staff of the armed forces of the Russian Federation noted that the result of the operation against terrorists is completely freed 105 quarters of the city of Aleppo, on a total area of 78.5 square kilometers.

“Note that in accordance with the decision of the President of the Russian Federation aviation of Russia’s air strikes in Aleppo is not applicable from October 18,” — he stressed.

Confrontation between government troops and militants in the largest city in Syria began in 2012. In the second year of the civil war radical groups managed to occupy the Eastern districts of Aleppo, while an Outpost of the Syrian army became the Western part of the city. The turning point in the course of the armed conflict came in the fall of 2016, when government forces backed by the Russian space forces undertook a massive offensive on militants occupied the quarters. The capture of the city, which is a major transportation hub will allow you to take control over Northwest Syria and to launch an attack on armed groups in Idlib and other areas.

Successful advancement of the Syrian army in Aleppo has caused a strong reaction in Western countries. The participants of the “friends of Syria” repeatedly urged to increase pressure on the Assad government and its allies to tighten sanctions policy and to take measures to impose a no-fly zone over the city. When the victory of the government troops in Aleppo was already close, the United States and its allies stopped the operation to capture Raqqa, which allowed the militants to regroup and launch a new offensive in Palmyra. Later, however, the Syrian army managed to stabilize the situation in the area of Palmyra.