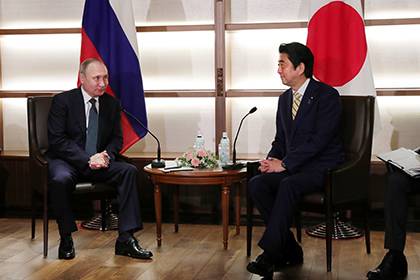 Samovar made of copper and wood was manufactured in Tula in 1870. The head of the Japanese government were also awarded the contemporary artist Igor Razzhivin “Russian Troika in Kolomna”.

Abe, in response, gave the Russian leader a reproduction of the paintings, “the Arrival of putyatino”. It is made on paper “handanovic”, recognized the cultural value of national importance in Japan and included in the list of intangible cultural heritage of UNESCO.

On Putin awarded the painting depicts the episode in the middle of the XIX century, when in the Shimoda came Admiral Putyatin Euthymius. He held talks with a Japanese official, a Russo Kawaji, the results of which were signed the Sino-Russian Treaty of friendship.

Earlier it was reported that Putin has also prepared a gift living in Nagato Russian woman. For the head of state, she ordered at a local Studio judo a personalized kimono.

December 9, the Japanese government stated that it had decided not to give Putin another dog breed Akita inu. In 2012 the President of Russia received the gift of a dog named Yume from the government of Akita Prefecture.