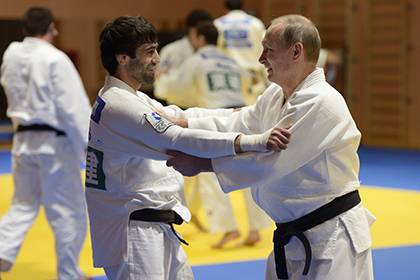 Russian woman angelina, living in the Japanese city of Nagato, prepared as a gift to President Vladimir Putin named a kimono. It is reported by TASS on Thursday, December 15.

In kimono Japanese katakana embroidered inscription “Vladimir Putin — Russia”. A local resident ordered it at the club where judo her child.

“I’m here [to Nagato] I live with my husband and children for about ten years, but really love Russia and often go there”, she said. The woman admitted that she had not agreed in advance of receipt of the gift to the President, but hopes for success.

Thursday, December 15, the Russian President arrived in Japan. The first day of the visit, he will hold in Sochi — the hometown of Prime Minister Shinzo Abe.

In an interview with Japanese journalists, Putin said judo is his first love. This sport holds a strong place in his life, the President said.

In late November, a resident of Lima, tried to give the sweater handmade Putin, who came to the APEC summit. She was detained by the security service. Subsequently, a gift of the Peruvian gave the Russian leader to journalists.