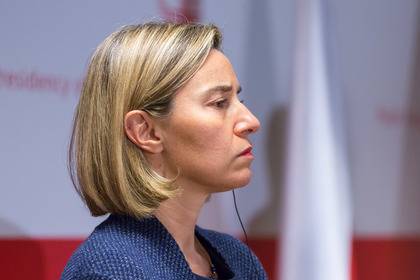 EU high representative for foreign Affairs and security policy Federica Mogherini made the possibility of combining the EU and Russia in opposition to the plans of the elected President of the USA of Donald trump to cancel a nuclear deal with Iran. She stated this in an interview with The Wall Street Journal.

Mogherini expressed the opinion that the US decision to abandon the deal with Iran would provoke opposition from the President of Russia Vladimir Putin, have contributed to the conclusion of the agreement. “If you analyze each case, it is possible to find questions where I was was not surprised the Europeans and Russians can be on the same side: Iran, middle East peace process, perhaps the role of the UN,” said the Commissioner.

At the same time, the head of European diplomacy questioned the fact that the US is going to a big deal with Russia on the Syrian and the Ukrainian question, excluding from the process of the EU. She also stressed that, whatever the administration’s decision to trump the EU will act against Moscow on the basis of the sanctions that are associated with the implementation of the Minsk agreements.

During the election campaign trump opposed the nuclear agreement with Iran.

In mid-July, 2015 Iran and the six international mediators (US, Russia, China, Britain, France, and Germany) reached agreement on Tehran’s nuclear program. The Islamic Republic has pledged to transform the Fordow plant in the technology center, and the reactor in Arak to rebuild in accordance with the international consortium. Spent fuel from it will be exported outside the country.

Tehran also pledged not to enrich uranium above the threshold at 3.67% and to limit its volume is 300 pounds for a period of 15 years. In exchange, Iran lifted the sanctions. Restrictive measures can only be returned if the country does not fulfill its obligations.