Terrorists from the “Islamic state” on December 11, took Palmyra, the release of which was the most publicized success of Russia in the Syrian campaign. Moscow has promised to do everything possible for the re-liberation of the city. Meanwhile, Syrian government troops almost took Aleppo, where part of the city was held by the rebels. “Medusa” tells what is happening in Syria. 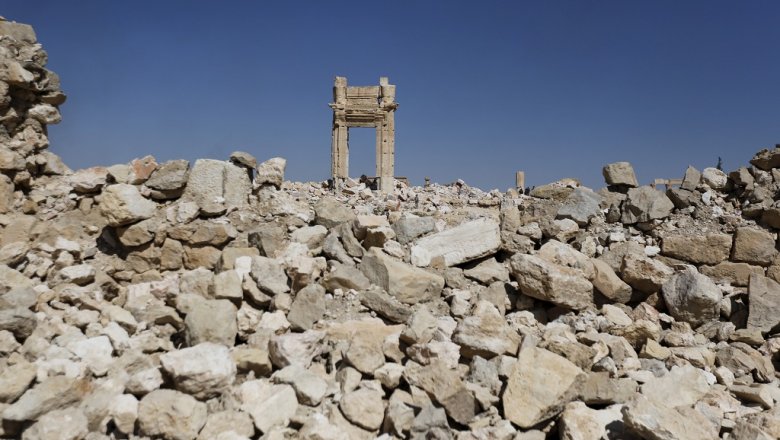 The liberation of Palmyra — the main achievement of the Russian operation in Syria. In may 2015 the terrorists of the “Islamic state” (banned in Russia as a terrorist organization) seized the town, near which are the ancient ruins recognized as a UNESCO world heritage site. Taking the city, the militants blew up revealing monuments; in particular, they destroyed the temple of Baal-Shamin is one of the most important monuments of late antiquity. The Syrian terrorists have beheaded an 82-year-old archaeologist Khaled al-Assad, who was trying to save from the Islamists, at least some of the exhibits.

The city remained in the hands of terrorists in nine months. At the end of March 2016, Syrian troops with the support of the Russian aviation and Lebanese group “Hezbollah” liberated Palmyra. In may, the musicians under the baton of Valery Gergiev played a concert in the ancient amphitheatre. Russian President Vladimir Putin later awarded Valery Gergiev the medal “For the liberation of Palmyra,” and cellist and friend of Putin-Sergey Roldugin has received the order of Alexander Nevsky for “special merits in the preparation and carrying out important humanitarian foreign policy actions”.

Valery Gergiev has performed with the Symphony orchestra in Palmyra

“Islamic state” took Palmyra in a few days. The terrorists went on the attack on Palmyra on Thursday, December 8. By 11 December, they took the city. The Syrian government has acknowledged the fall of Palmyra. According to local residents, a small Russian base with the onset of the “Islamic state” was empty. The defense Ministry reported dozens of air strikes that led to the deaths of hundreds of militants; however, the advance of the terrorists could not be stopped.

In social networks representatives of ISIS boasted that they seized a lot of military equipment to Syria; in one of the published clips militants humiliate captured Syrian soldiers. Local residents in the city is almost there; once there lived 80 thousand people, but now there are a few hundred families, and authorities say the majority of the population evacuated. “Islamic state” promises to continue the attack and to go on a military airfield T4 (Tiyas) West of Palmyra, which uses Russian aircraft, and further West to HOMS, which is under the control of the government.

The capture of Palmyra was an important victory for ISIS in recent time, the terrorists only lost territory. The Islamic state has shown that it can conduct offensive actions. The importance of Palmyra lies in the fact that the city is in a strategically important place: through it passes the road from Damascus to the East and Iraq near oil fields. Why the Syrian army didn’t pay due attention to the protection of Palmyra, is unknown.

Russia has promised to return to Palmyra. As stated by the Deputy Minister of foreign Affairs Vladimir Titov, “we will do everything possible to prevent return to these areas of terrorists.” Press Secretary of the President Dmitry Peskov stressed that the loss of Palmyra is not the loss of Russia: “Palmyra is still a Syrian city. And it’s not Russia loses Palmyra. The threat of losing the Palmyra is the damage for the civilized world, not for Russia. It is damaging for the image of the entire civilized mankind”.

Before the onset of the militants of Palmyra all the attention was focused on Aleppo. Once Syria’s largest city is now almost completely destroyed. A few months Syrian government troops trying to take the last stronghold of the rebels, who previously controlled half of the city. Authorities claim that they got 98 percent of the territory of Aleppo. In the city, a humanitarian disaster: there is not enough of the most necessary things, but the parties with the participation of the USA and Russia can’t agree on a long-term truce; short-term cease-fire was declared for a week in September, but practically it was not observed.

With the capture militants Palmyra government troops have a second front. According to unconfirmed reports, they have had to withdraw some troops from other areas to send them to Palmyra. Despite the capture of Palmyra, the situation of the “Islamic state” on other fronts worsens: the attack on Iraq Mosul, the Kurds with US support, moving to raqqa, the so-called capital of the Islamic state; Syrian rebels backed by Turkey attack al-Bab, a stronghold of the terrorists in the North of Syria.