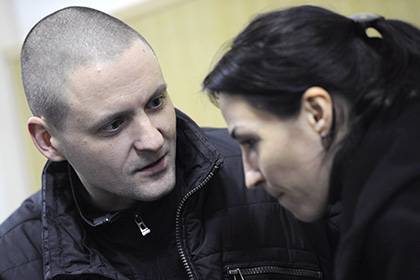 Sergei Udaltsov with his wife

The wife of opposition leader Sergei Udaltsov has explained his words about his participation in the presidential elections in Russia is a joke and accused the journalists of being unprofessional. Related posts Anastasia Udaltsova has posted on his Twitter page on Wednesday, December 14.

She admitted she really doesn’t know how to deal with her husband after the end of the sentence. “Maybe politics, maybe more than. He is a man of many talents,” — said Udaltsov.

The wife of the opposition leader also chided journalists in pursuit of sensation and posted a new statement that suggested to be official. “The presidential election we will support the candidate of the left forces. I hope it will be a single candidate”, — she wrote.

Earlier Wednesday, Udaltsov posted on his Twitter a message stating that her husband, convicted for organizing mass riots, to take part in the presidential elections in Russia scheduled for March 2018. His sentence expires in August next year.

13 Dec the founder of Fund of fight against corruption, opposition leader Alexei Navalny has announced plans to run for the presidency.