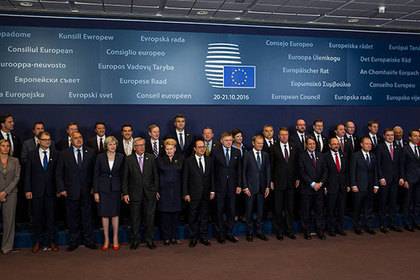 At the EU summit, which will be held on Thursday, December 15, to discuss the issue of extending sanctions against Russia. It is reported TASS citing a senior source in Brussels.

“I think the EU will receive a recommendation from the Chancellor [Angela] Merkel and the French President [Francois] Hollande that the economic sanctions imposed because of Russia’s aggression against Ukraine should be extended,” he explained.

On 13 December the leaders of Germany and France stated the necessity of prolongation of action of restrictive measures against Moscow.

“Sanctions against Russia will be necessary to extend again, although we would like to see more serious progress in the implementation of the Minsk agreements”, — said Merkel.

Hollande, in turn, supported the proposal.

Restrictive measures against certain sectors of the Russian economy, Russia has until January 31, 2017. Russian retaliatory counter-sanctions extended until 31 December of the following year.

Russia has repeatedly said that is not party to the conflict in the Donbass, therefore, the responsibility for implementing the provisions of the Minsk agreements rests on the Kiev authorities and militia leaders.