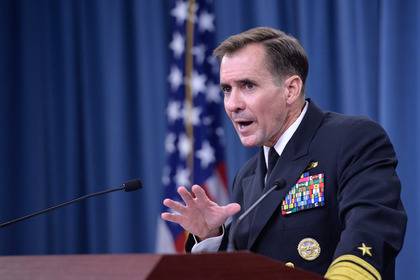 The US state Department admits the possibility that the militant group “Islamic state” of Iraq’s Mosul took part in the fighting in the Syrian Palmyra. Such statement as transfers RIA Novosti news Agency, made an official representative of the Department John Kirby.

“I don’t know, but can’t rule it out. We knew that some of them leave Mosul, but where they went and what they did, we don’t know,” he said.

The state Department denies that the United States stopped supporting the attack on the Syrian “capital” of ISIS Raqqa, and that this could contribute to the militant attack on Palmyra. “Allegations that we somehow stopped supporting force “of the Democratic forces in Syria” in an attempt to further isolate Raqqa, wrong,” said Kirby.

Available to the Washington information on the situation in the area of Palmyra Kirby said that “cannot confirm the extent to which the” IG control.

Earlier official representative of Russian defense Ministry Igor Konashenkov said that, apparently, the militants have focused Palmyra, confident that the fighting in raqqa will not resume. According to the war Department, the total number of the invading terrorists were over five thousand.

That inaction, the US allowed Islamic state to throw fighters under the Palmyra of Raqqa, said Deputy head of Committee on defense and security, Federation Council Frants Klintsevich.

On December 11 the Governor of the Syrian province of HOMS Talal al-Barazi acknowledged that government forces handed over Palmyra militants of the “Islamic state”. However, he assured that the city will soon be captured from the terrorists.

In March the Syrian army with the support of Navalny was freed Mira from is militants. During the period of occupation serious damage was caused to many cultural sites of the city, included in the register of world heritage of UNESCO. In particular, was completely plundered the national Museum. Russian experts participated in the demining of the city.

“Islamic state” (IG) made in Russia in the list of terrorist organizations, for participation in activities which provide for criminal liability.