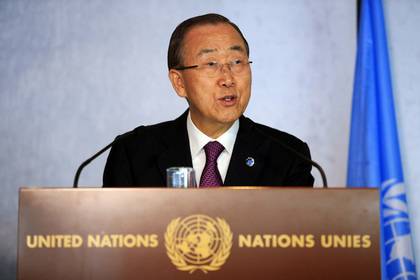 UN Secretary-General ban Ki-moon expressed concern over unverified reports of atrocities against residents of the Syrian city of Aleppo, in particular, women and children. On Monday, December 12, reported on the website of the United Nations.

“Ban Ki-moon instructed the UN special envoy for Syria (Staffan De Mistura — approx. “Of the tape.ru”) to discuss the situation with involved in the conflict parties” , — said in a statement. The organization recalled the obligation of parties to protect civilians and to respect international law and human rights. It does not specify what kind of atrocities going on.

Monday, December 12, it became known that government forces in Syria and allied forces were left to clean up terrorists from three small district of Aleppo. The military has begun to examine underground utilities in the Eastern part of the city. According to the source “Tape.ru”, hiding there refused to surrender the terrorists, they hope to leave the city through the uncovered moves.

The attack on the terrorists-controlled areas of Aleppo began in mid-November 2016. By the end of the month the gangs have been surrounded, and then many of them chose to lay down their arms.